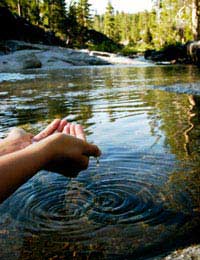 It is one of those dreadful ironies that for many holiday destinations while the local economy depends on tourism, the influx of people that this involves places enormous additional demands on the local infrastructure and resources. Providing sufficient water, energy, waste and food for an increased population can be a real headache, especially for countries where there is scarcely enough to go round to start with, though developed nations are not entirely immune from the effect. So, having opted for the most eco-friendly holiday you can, poured over the green-credentials of the travel company and resort and prepared your carbon offset, all that remains is to finish off the perfect approach to responsible tourism by sparing a thought for local resources.

Even with the use of meters and the almost annual drought orders and hosepipe bans, it is almost impossible for the first time visitor from a water-rich country like the UK to imagine the real value of something we take so much for granted – at least until you see it for yourself.In many countries, water is a scarce and remarkably precious resource, forcing people to manage with just a fraction of the volume we regularly enjoy. Add to this the frequent difficulties involved in transporting it – sometimes entailing a lengthy trek to a bore-hole or standpipe – and it is easy to understand the need to be conservative in your water use. Even when getting water in the first place is not such a problem, treating it to make it potable – drinkable – can be an energy intensive process. If your holiday takes you to water-poor lands – and you need go no further that the Canary Islands for this to apply – then if you really are eco-conscious, you simply have to use as little as you can.

Energy is one of the key unifying environmental issues for the world, uniting developed and developing countries alike and making conserving power every bit as relevant to holidays at home as those taken abroad. Although much depends on where you are, the general problems remain the same – principally supply and carbon cost – and at times even these find themselves in conflict with each other. As a carbon neutral fuel, for instance, burning wood may well be preferable to flicking on the electric – but how does it really compare in a country where trees are scarce and electricity is generated by solar power? Even this is too simplistic, as it takes no account of the energy or resources required to make the solar panels in the first place, transport them, install them and dispose of them at the end of their useful life. Sometimes the issues are not quite so clear-cut as the “sound-bite” approach to environmentalism would have you believe and it can take a bit of careful thought – and knowledge – to do what is really the right thing. In the end, it comes down to doing your best; in general the less energy you use, the less harm you do, whether that is cutting down on the coal at your Aviemore winter retreat or nudging down the air conditioning in Antigua.

Travelling light should be second nature to the eco-conscious holiday maker – reducing baggage weight, after all, minimises the fuel needed to carry it around and lessens the associated carbon emissions too. However, by avoiding disposable goods and excess packaging you also take much of the strain off local waste management arrangements – and in some parts of the world, this can be a serious consideration. This issue is not simply limited to remote holiday venues in emerging nations – many regions of Britain also suffer the added economic, social and environmental effects of tourism-related waste disposal. In the UK alone, the average household throws away 3 kilograms of food and a staggering 14 kilograms of food packaging each week. The additional burden that simply feeding the summer influx of holiday-makers places on local waste services – not to mention water supply, power and sewage treatment – is clear and what holds true here, also applies elsewhere.

Of course, it goes without saying that all green holiday-makers understand the general principal of being careful with the world’s resources. However, sometimes it may not be immediately obvious just how important that can be at a practical, local level – particularly in countries where the distribution of wealth and resources is very different from what we are used to in Britain. It has long been said that travel broadens the mind and perhaps in some ways it is by awakening us to the true value of water and energy and the very real wastefulness of waste that our minds become their broadest. The old maxim “waste not, want not” has a lot going for it.