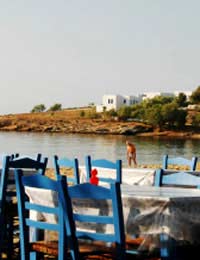 The debate over travel and its effects on the environment has at least over recent years, tended to focus primarily on issues of aviation, global warming and man-made climate change. For tourism especially, much of the discussion of its negative effects has centred on the issue of carbon emissions. Clearly, the return of fossil carbon into the atmosphere from the burgeoning flights necessary to take growing numbers of us to ever more distant corners of the globe is a concern, but it is by no means the only one. Indeed it is not even the only aspect of the emissions-from-flying question itself – the nitrogen oxides and water vapour also produced from aircraft seldom get a mention and yet they are greenhouse gases too.

Tourism has effects beyond the fuel burnt simply getting on holiday in the first place and many of them are much more immediately visible than the more sinister and intangible threat of emissions. In many places, the physical environment can be heavily affected by the passage of tourists, especially for popular destinations, where the sheer weight of numbers of people visiting can simply prove too much. Often as a tourist venue becomes better known, a round of building work follows the accompanying expansion of the original settlement, usually to the detriment of the local environment – which can often have been the reason for its popularity in the first place. More hotels and more restaurants inevitably mean more strain on the local infrastructure, but they also mean more light pollution too. This is not simply about no longer being able to see the stars so easily. In some parts of the world – the Greek Islands being a well-known case – restaurants along the beaches are very popular tourist draws, but their light-spillage confuses hatching sea-turtles. The young hatchlings are programmed to head for the brightest thing they can see – in nature, the water’s edge – and safety. When they follow their age-old instinct today, they are as likely to be heading in exactly the opposite direction – and Tavernas offer no refuge from cats or predatory gulls.

The over-usage problem is not restricted solely to seaside resorts, nor just too foreign holiday destinations. Many of the most popular of Britain’s National Parks, mountain paths and forestry walks exhibit the signs of wear and tear – eroded paths, excessive litter and general damage – often not intentional, but unwelcome never-the-less. It is perhaps one of the great ironies that the growing numbers of people looking to reconnect with nature and holiday at home to avoid excessive carbon costs, may unwittingly be contributing to one problem, while trying to solve another.

Seasonal influxes of tourists also place additional demands on local resources, particularly in remote and poorer parts of the world. Water, energy and food, for example are often used much more frugally than in the west – the average tourist generally requiring far more than what would constitute a “fair share” by the standards of the region. Even where the infrastructure exists to meet this demand – and in many places it does not – often the end result leads to a gradual environmental deterioration unless significant new investment follows in the wake of the tourist-boom. It does not take too much additional water extraction from watercourses or groundwater to begin to see changes to rivers and wetlands; in the same way demands for energy which are met with hydro-electric schemes can themselves have their affect on aquatic habitats.

Tourism also increases the pressure on the arrangements for managing waste and wastewater. Even in the developed world, this can be a significant issue, especially if the resort has a naturally small year-round population, since it is unlikely that the original facilities have been made large enough to cope with the additional load placed on them during the season.

The problem is far worse for many developing countries, where the existing infrastructure is often heavily under-resourced and struggles to cope with the indigenous demand; treatment and disposal routes can be significantly stretched by the extra burden of the tourist industry.It is almost impossible to avoid having some kind of negative environmental impact when you travel and it is certainly not all about flying. The very act of going on holiday – however you go – inevitably means that you will cause some kind of damage and make some demands on local resources – however slight. However, being aware of the sorts of things which cause the biggest problems enables you to begin to avoid doing them, which is a positive step in itself. While you may not be able to get around doing harm altogether, you can at least minimise how much you do – and knowing where to start is half the battle.